Home | Blog | Could the future of “Going to the Movies” be… not going at all? 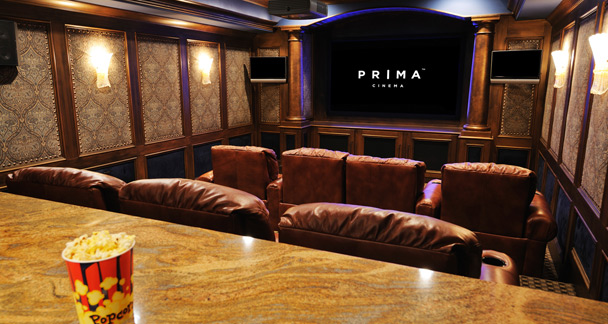 Could the future of “Going to the Movies” be… not going at all?

With the release of PRIMA Cinema™, that could be exactly what consumers are in for. Imagine being able to watch a theatrical release of a highly anticipated movie without waiting in line, fighting crowds and all from the comfort of your own home theater. PRIMA Cinema™ has brought that to life, but not without a price.

PRIMA Cinema™ presents theatrically released Hollywood films, in the comfort of your private home theater. Imagine hosting a red carpet premiere in your larger than life custom home theater for a cinematic experience unlike any other. Until PRIMA Cinema, only a select few entertainment insiders were able to screen a theatrically released film in their home. No longer. PRIMA Cinema allows you to invite family and friends to enjoy the ultimate Hollywood experience as you Redefine Movie Night™. Whether it’s an exquisite alien world in 3D, a mad chase through the streets of Paris or a steamy romance, PRIMA Cinema is your ticket to be First in Line, Every Time™ in your own private theater.

According to Prima in a CE Pro article, the sleek design, by BMW Designworks, plays movies at higher resolution than Blu-ray, along with 3D support and lossless digital surround sound to provide “the ultimate experience in the home.” PRIMA Cinema automatically pre-caches and stores theatrical released movie content over a broadband connection. Members browse for a movie, select, and watch … no buffering, no streaming, and no unwanted interruptions. Following the theatrical window, these films remain resident on the PRIMA Cinema Player for as long as they are playing in theaters.

At $35,000 and $500 per 2D movie viewing, the system is tailored for people who have private home cinemas and typically will wait several months for a the movie to come out on disc or celebrities who really can’t go out in public to catch a movie. The Prima Cinema system allows this portion of the movie appreciation public to enjoy films while they are socially current.

So we want to know… if Prima Cinema became more mainstream with a lower price point, would you consider this over a trip to the movies? Or is it the night out at the movie theater what you enjoy most?